For a more detailed literary timeline going back to 1400, CLICK HERE.

1875 - Return of the FRANKENSTEIN MONSTER.

1907 - Creation of ROULETABILLE and of MISS MOUSQUETERR.

1913 - Creations of the CHEVALIER ILLUSION and of CHERI-BIBI.

1927 - Creation of BELPHEGOR and of PAUL ARDENT.

1943 - L'EPERVIER BLEU (the BLUE HAWK) debuts in SPIROU. The RAYON U is launched in BRAVO. OTOMOX appears in PIC & NIC. First case for NESTOR BURMA. 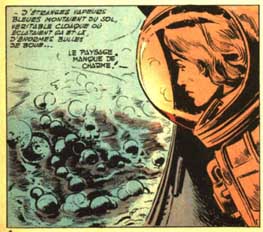 1950 - Creation of ARABELLE THE LAST MERMAID in daily strips in FRANCE-SOIR.

1953 - THE CONQUERORS OF SPACE are launched in METEOR. THE CAT debuts in HEROIC-ALBUMS. BOB MORANE novels begin. KIM DEVIL starts in SPIROU.

1963 - ZEMBLA is launched. TENEBRAX and the CASTAWAYS IN TIME appear in CHOUCHOU. TITAN is launched. ZIG & PUCE return in TINTIN. JUDEX film.

1966 - LONE SLOANE begins. JODELLE is launched. LUC ORIENT and the SKBLLLZ debut in TINTIN. The POPULAR AEROMEDON starts in PILOTE.

1969 - WAMPUS and MISTER SONG (aka CLASH) are launched in WAMPUS. MR. MAGELLAN debuts in TINTIN. The saga of the B.I.D.E. is launched. SILVER SHADOW appears in SPECIAL-KIWI. First MEPHISTA.

1972 - FUTURA is launched with JALEB, HOMICRON, and the TIME BRIGADE. FRANKENSTEIN comics in HALLUCINATIONS.

1974 - WAKI is launched. LARRY CANNON and JEFF SULLIVAN debut in FUTURA. The NAVIGATORS OF INFINITY daily strip begins in L'HUMANITE. The PATROL OF THE DEPTHS is introduced in NEVADA. TIRIEL is launched.

1975 - KABUR and the BRONZE GLADIATOR appear in KABUR. SIBILLA debuts in FUTURA. SUPER MATOU is launched in PIF.

1982 - MALINBOURNE appears in BLEK, and the COMTE DE SAINT-GERMAIN in RODEO. 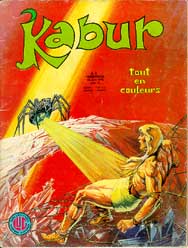 2001 - A second series of FANTASK is launched with the returns of HOMICRON, WAMPUS, OZARK and PHENIX. BELPHEGOR film and animated series.