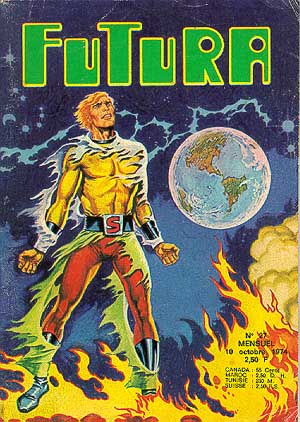 L'HOMME D'AIRAIN
[THE MAN OF BRASS]

Jeff Sullivan is the modern-day descendant of a mutant family that has latent superhuman powers.  Following an electrical accident, Sullivan finds himself transported into a parallel Earth where the Allies lost WW II and the Japanese rule America.  After fighting the Japanese, Sullivan meets other members of his dimension-spanning family who teach him how to use his powers.  He then returns to his Earth to fight crime.