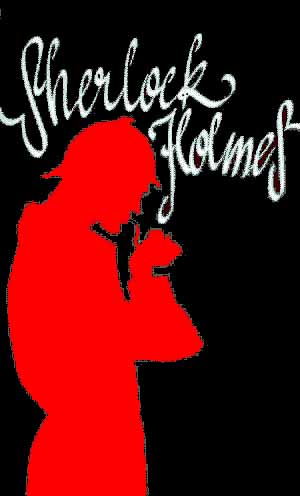 Every Sherlock Holmes fan presumably know of his encounter with Sigmund Freud in Nicholas Meyer's The Seven Percent Solution, or of the return of Moriarty as narrated by John Gardner? But how many fans know of the Great Detective's encounters with real-life founder of the Paris Sureté Vidocq, the master gentleman-burglar Arsène Lupin, or even Albert Einstein? Or of his secret adventures for British Intelligence during the Great War?

The reason why these adventures, and many others, have so far remained relatively obscure in England and in America is because they have been recorded only in French. Like that other world-famous icon, Mary Shelley's Frankenstein Monster (whom Holmes met in a French original radio drama), the Great Detective has lived a number of extraordinary exploits under the pens of talented French authors, such as René Réouven, André-Paul Duchateau, Alexis Lecaye, Yves Varende, Béatrice Nicodème, and others.

The purpose of this web page is not to be exhaustive and list each and every original Holmes pastiche written in French, but to limit ourselves only to the most nearly-canonical ones, which deserve a justifiable place in the great Holmesian pantheon. We have not dealt with short stories, satirical novels, parodies, novels where Holmes makes only an authentically dubious cameo, etc.

We also have not included original French media adaptations of the canon, only original works deriving their inspirations from the stories of Sir Arthur Conan Doyle.

Finally, Sherlock Holmes fans should also check our page devoted to Harry Dickson, the so-called "American Sherlock Holmes", initially created as a German pastiche, but which blossomed into a fully original and rich creation under the pen of the talented Jean Ray.

La Ligue des Héros (Mnémos, 2002)
Note: In an alternate England where magic works, and where Peter Pan and the Lost Boys have returned, Lord Kraven, Lord Greystoke and the Great Detective have various adventures, but can't save the British Empire.
Scheduled to be translated in English by BLACK COAT PRESS.