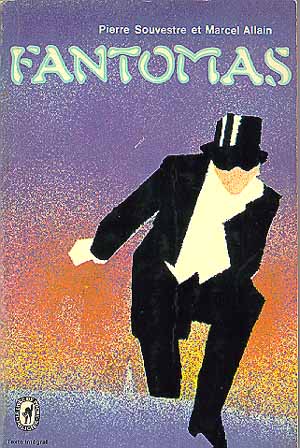 Fantômas was the brainchild of Marcel Allain and Pierre Souvestre. Fantômas was created in 1911 and appeared in a total of thirty-two volumes written by the two collaborators, then a subsequent eleven volumes written by Allain alone after Souvestre's death in 1914. Allain went on to become the prolific author of well over 500 adventure, romance, detective novels and serials. His best-known achievement, however, remained the Fantômas series.

Arch-criminal Fantômas was one of the most popular characters in the history of French pulp literature. Fantômas appears to have been born in 1867. Later, it was revealed that his nemesis, the determined French police detective Juve, is his twin brother.

In the books, it is established that c. 1892, the man who later became Fantômas called himself Archduke Juan North and operated in the German Principality of Heisse-Weimar. There he fathered a child, Vladimir, with an unidentified noblewoman. In circumstances unrevealed, he was arrested and sent to prison.

C. 1895, Fantômas was in India. There, an unidentified European woman gave birth to a baby girl, Hélène, whose father might be Fantômas, or an Indian Prince who was Fantômas' acolyte. The girl was raised in South Africa.

In 1897, Fantômas was in America and Mexico. There, he ruined his then-business partner, Etienne Rambert.

In 1899, he fought in the Second Boer War in South Africa under the name of Gurn. He fought in the Transvaal as an artillery sergeant under the command of Lord Roberts. He became aide-de-camp to Lord Edward Beltham of Scottwell Hill and fell in love with his younger wife, Lady Maud Beltham.

Upon their return to Europe, soon before the first novel begins (c. 1900), Gurn and Lady Beltham were surprised in their Paris love nest, Rue Levert, by her husband. Lord Beltham was about to shoot Maud when Gurn hit him with a hammer then strangled him.

Fantômas then impersonated Etienne Rambert and framed his son, Charles Rambert, for a murder he had committed. His adversary, Juve, truly obsessed with his capture, exposed Fantômas and turned young Charles Rambert into a journalist, Jerôme Fandor, now working for La Capitale.

Lady Beltham remained constantly torn between her passion for the villain and her horror at his criminal schemes. She eventually committed suicide in 1910 after killing the son of one of Fantômas' earlier victims who was seeking revenge.

Fandor fell in love with Hélène and, despite Fantômas repeated attempts to break them up, married her.

Fantômas' evil son, Vladimir, reappeared in 1911. Vladimir's girl-friend, Firmaine, was murdered by Fantômas and ladimir is shot and killed by Juve in No. 29 just as he was about to shoot Hélène.

Both Fantômas and Juve are reputed to have died aboard the Titanic in 1912.

The first Fantômas book cover, showing a contemplative masked man dressed in a dinner jacket and holding a dagger, boldly stepping over Paris, was so well known that it has almost become a cliché today. Just as Sherlock Holmes was the archetypal modern detective, Fantômas was the archetypal modern arch-villain. Among his better-known (and even more horrific) literary descendents were the Italian super-villains Diabolik, Satanik, and Kriminal.

FOR SPECULATIONS ON FANTOMAS' REAL IDENTITY AND HIS CHILDREN, SEE OUR ARTICLE THE TANGLED WEB.

FOR MORE ABOUT MARCEL ALLAIN AND HIS OTHER SERIES, TIGRIS, FATALA AND MISS TERIA. 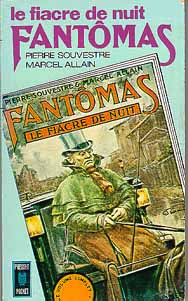 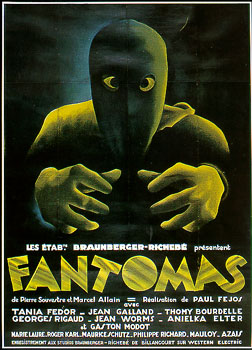 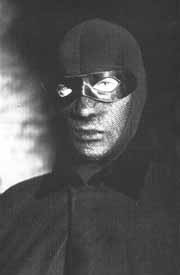 Fantômas contre les Nains [Fantomas vs. the Dwarves]. A weekly color page written by Marcel Allain and drawn by P. Santini was published in "Gavroche"  Nos. 24-30, 1941.  This series was interrupted because of censorship; a sequel, Fantômas et l'Enfer Sous-Marin [Fantomas and the Undersea Hell] was written but not published.

A daily Fantômas b&w strip drawn by Pierre Tabary was syndicated by Opera Mundi from November 1957 to March 1958 (192 strips in total), adapting the first two novels.

Seventeen Fantômas fumetti (photo-novels) magazines adapting Nos 1, 2, 3 and 5 of the book series were published by Del Duca in 1962 and 1963.

A new weekly, Fantômas color page, written by Agnès Guilloteau and drawn by Jacques Taillefer, was again syndicated by Opera Mundi in 1969 and published in "Jours de France".

Finally, a series of Fantômas graphic novels written by L. Dellisse and drawn by Claude Laverdure were published by Belgian publisher Claude Lefrancq in its "BDetectives" imprint, starting in 1990, as follows: 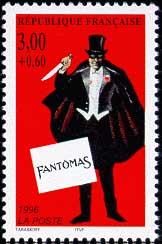 "Oh, curse him!  Fantomas has escaped!
Fantomas has gotten away!
He has had some innocent man
executed in his stead!
I tell you, Fantomas is alive! "
("Fantômas"- Last Chapter)
LINKS TO OTHER SITES: