Les Vampires was launched by Gaumont to compete with the U.S. serial Les Mystères de New York, starring Pearl White (The Perils of Pauline). It was written and directed by Feuillade after Fantômas, but before Judex.

Les Vampires' success was due in great part to the character of Irma Vep, the head villainess, whose name is an anagram of "vampire," played by Musidora -- a voluptuous, dark-haired stage and music-hall performer who did all her own stunt work. Musidora (who occasionally posed naked) virtually defined female beauty for the decade, and her character, identified mostly by her black tights and black mask, slinking down corridors and escaping over rooftops, defined the popular archetype of the super-villainess femme fatale for decades to come -- Catwoman, etc.

FOR MORE ABOUT LOUIS FEUILLADE. 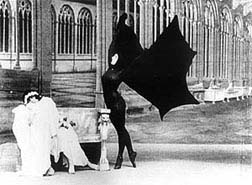