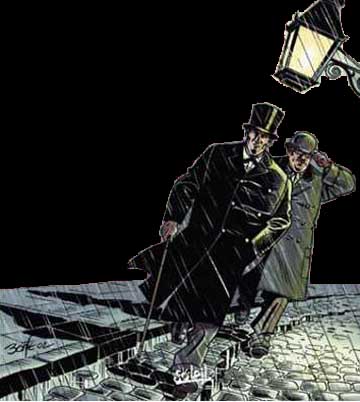 While glancing over the article, "Will There Be Light Tomorrow? The Greatest Conspiracy The World Has Ever Known", it struck me that there was a severe lack of information on Dr. Siger Holmes, which somewhat disappointed me, as a Holmesian scholar. That was when something occured to me: Why would a professor attend a top-secret meeting on the outcome of the French Revolution? I could understand why Lord Greystoke, Sir Percy Blakeney, or Louis Lupin may have attended, but Dr. Holmes?

That's when it occured to me that, in "The Adventure of the Greek Interpreter", the world first and foremost consulting detective told his Boswell, Dr. John H. Watson, that his grandmother "was the sister of Vernet, the French artist" and that his ancestors were country squires. There was also the eccentric young doctor, Verner, a "distant relation of Holmes", who purchased Watson's Kensington practive in "The Adventure of the Norwood Builder".

But still, I told myself, though an educated and intelligent man with a French heritage may be consulted on the matter, how would he manage to access such a top-secret meeting such as this?

As my mind flooded with thoughts, I realized that I was playing the game you had astounded me by playing so skillfully, so I set out to use your methods. Keeping in mind the gimmicks used by the Lupin and Lecoq families, I took the liberty of researching the name "Siger Holmes" - I didn't expect much results, but at least I wouldn't have overlooked anything.

Imagine my surprise when I learned how incredibly signifagent his name really was. The name "Siger" is a commonly used Scandinavian name meaning "victory" or "triumph" (other variations include Sigrid, meaning "beautiful victory", "Sigrun", meaning "secret victory", and "Sigurd", meaning "victory guardian"), while the name "Holmes" translates as "by the meadow" or "by the lowland". I couldn't believe my luck. The name Siger Holmes was an alias conveying the message that there had been some sort of winning had occured, and in what location it had occured.

The trail was getting warmer and the scent stronger, but some things were still beyond my comprehension. For example, what was Holmes' real name? Whatever it was, I believe it was at least vaguely French. Why? In due time, my friend, in due time... But I suspect one of the reasons Sebastian Noel was so close to him was because they were both of French descent; indeed, Noel's surname is a very popular and celebrative word of that tongue. (I believe I will mention Noel later.) And I believe that while he was still a patriotic Englishman, he still had noticable French descent.

What relevance does this have, and how does it relate to his being at the meeting? Quite simply, he was a spy.

The Vernets were very wealthy and, as any in-depth research will reveal, had many connections with the French government. As well, Holmes' (or whatever his real name was) high position as the result of education had him, no doubt, often consulted by the French government for an expertise opinion. It was these informed opinions that made them so useful to the agents at Wold Newton.

Also, he obviously knew many tongues, as his birthplace was British, his heritage was French, and his alias was Scandinavian -- a good secret agent is quickly billingual, and he was good enough for the honour of attending the notorious Wold Newton meeting.

We must also remember that many of his descendants were spies: Sherlock was frequently involved in espionage (see "His Last Bow" and "But Our Hero Was Not Dead"), Mycroft was head of British Intelligence and the first M (see "Son of Holmes"), "Shrinking" Violet had a son with M16 operative James Bond, and so forth. Also, in the case of the Boulevard assassin, Sherlock displayed a hefty knowledge of French diplomacy for someone who only filled his "brain attic" with things relevant to his work. (See any pastiche adaption of "The Boulevard Assasin".)

However, is it not possible that Siger Holmes was, in fact, his birth name? If you'll recall, Siger Holmes translates as "victory by the lowland" - however, "lowland" can also be translated as "island", as well as "meadow". Now, what lush island could this be referring to? Well, on what island was there some sort of victory? In the Mediterranean Sea, just off the coast of France and Italy, there sits a small but beautiful island called Corsica.

In 1768, around the time of Siger's birth, France captured this defenseless little piece of land during the dawn of the French Revolution. It's been demonstrated that the descendants of Siger Holmes were spies; why couldn't he ancestors have been? Even Philip Jose Farmer could only learn the name of Siger's father, Mycroft Holmes. He was the husband of Agatha Bumppo, the member of a very adventurous family. And, as shown, his son was a spy on the side of France; why couldn't he have been? Siger Holmes helped stopped the French Revolution, so could his father have started it (with well-meaning intentions, of course)? With the family flair of disguise and intellect, he easily could have helped infiltrate it and conquer it from inside. In addition to that victory, his beloved wife became pregnant, and in celebration he cryptically named his son for his own triumph. In fact, Siger, like his descendant Sherlock, could have inherited his father's files, making him espesially more useful at the Wold Newton meeting. So, instead of it being Siger Holmes' real name that we should look for, perhaps it's Mycroft's real surname.

However, what still remains unknown is, despite the fact that he would have countless infinitely useful contacts and the potential intelligence of a spy, one still wonders how he could be important enough to attend such a top-secret and imperative meeting as Wold Newton (although he would have undoubtedly contributed to it's existence).

Recently it has come to my attention that, at age nine (making him born in 1769 - a year after the conquest of Corsica), a French child prodigy, the son of a Corsican lawyer (note his heritage!), attended Collège militaire royal de Brienne in 1778, where he established a reputation for having incredible skill related to mathematics, as well as an impeccable memory for geography. The child's name was Napoleon Bonoparte, and he later coupled those two skills together as military cunning. Bonoparte became recognized as a real threat in 1795 (note the year) when, in October (two months before December) he became général de division and général en chef de l'armée de l'Interieur.

Now, both Sherlock Holmes and James Moriarty have shown an incredible mathematical ability, with Moriarty publishing what he considered the most brilliant work of literature ever, "The Dynamics of an Asteroid", and with Sherlock and Mycroft being the only knows critics of the book. Moriarty no doubt inherited this trait from his grand-father, Sebastian Noel. And Noel was taught mathematics by Dr. Siger Holmes. And we don't know any of Holmes' previous universities. Quite possibly, with Napoleon becoming an increasingly intimidating presence, he became more and more vital to determining what Bonaparte's course of action would most likely be, as he was the one who originally taught him mathematics. This helped them determine how the French Revolution would result immensely. There is, in fact, a great possibility that he had already met Louis Lupin.

I also suspect Sebastian Noel, perhaps innocently, stumbled upon some of "Siger Holmes"s papers and, curious, followed him on horseback to Wold Newton. They were close friends and perhaps Noel had been allowed access to some of Holmes' private property. Ironically, it was this blunder between friendly student/teacher that lead to their ancestors being enemies, and the roles reversed (Sherlock Holmes was Professor James Moriarty's student). It is also possible, however, that Noel had been employed, naively or otherwise, by his mentor to perform some spy work (perhaps delivering messages).

Obviously, as stated in my Boulevard Assassin theory, Holmes had learned of some of the foreign intrigue his ancestor was involved in and therefore wanted to throw Watson (and the readers) off track. "But her name was Violet Clarke Raffles," I hear you protest, "and the sister of Alice!" Ah, there is where you are wrong. Philip J. Farmer's research was admirable, but flawed.

First of all, he too was thrown off by Sherlock's false (or at least tweaked) statement. Secondly, he learned that Alice Clarke Raffles had a STEP-sister, but couldn't learn her last name. SO he simply wrote her as Violet Clarke in "Tarzan Alive"! (He does, in fact, say that her name was Violet Clarke, as opposed to Alice's Raffles.)

This means that Alice was the only one with all the Raffles relatives and Violet Clarke Vernet was the one related to Vernet (and Verner). Perhaps not wanting readers to learn of his lack of knowledge about the subject, he simply didn't mention that her last name was unknown but, not wanting to lie completely, he did write down her name as Violet Clarke, although (perhaps accidentally, perhaps as part of the ploy) he listed her as her full-sister. He than learned of their son, Mycroft, who also married a Violet and, fooled by Holmes' statement, made Violet Vernet his wife.