The Radio Series
Signé Furax began modestly on 15 October 1951 at 1:10 p.m. on French channel RTF as a short-lived radio serial of ten-minute instalments entitled Malheurs aux Barbus [Woe To The Bearded Men].  Written by renowned humorists Pierre Dac and Francis Blanche (who also starred in it), it narrated the fight of private investigators Black and White against the megalomaniacal villain, Edmond Furax, a cross between Arsene Lupin and Fantômas.

Furax and Socrate by artist Henry Blanc (see below)

In this madcap serial, Furax kidnapped 642 Bearded Men, took over an island in the Hebrides, then traveled through space to Antares, and through time back to the days of the Sun King. 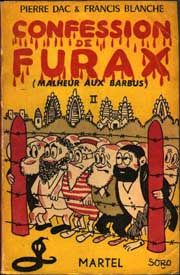 Furax and Malvina
by Henry Blanc

This time, Furax and his girl-friend, the beautiful Malvina, came out of retirement to fight on the side of good and thwart the nefarious schemes of the evil sect of the Babus, led by the diabolical Klakmuf.  Furax's allies included a colorful gallery of characters, such as Police Commissioner Socrate, his old enemies and now friends private investigators Black and White, former hitman Asti Spumante, genial scientist Hardy-Petit, his daughter Carole and son-in-law Théo Courant, gang leader Maurice Champot, aka La Grammaire, and even the president of the far-off planet Asterix, Clodomir.

Furax and friends by Henry Blanc

The first series, entitled Le Boudin Sacré [The Sacred Sausage] (1956-57), began with an attempt by the Babus to frame Furax in a plot involving the dehydratation of Paris' best-known monuments to better transport them to their own, middle-eastern state, Filikistan.  Furax, however, outwits the Babus and gains control of the sect through the stealing of their sacred sausage, but his secret identity -- that of France's Chief of Police -- is revealed.  The story ends with a temporarily insane Furax travelling back in time to the Crimean War in a ultimtely aborted effort to rewrite history.

The next saga, entitled La Lumière qui Éteint [The Light That Dims] (1957-58), began with an investigation into a new plot by the Babus to take over the world, using a strange, blue light which sapped people's wills.  The story then moved to the discovery of the Babus' secret base located on the atoll Anatole, which as it turned out, is also a space-faring vehicle.  Anatole took our heroes to the far-off planet Asterix, where they met friendly aliens led by President Clodomir.  Upon their return to Earth, Furax thwarted a last Babu plan to release an army of giant spiders.

The third saga, entitled Le Gruyère Qui Tue [The Swiss Cheese That Kills] (1958-59), saw Furax and his friends team up again to save Earth from an invasion of body-snatching alien parasites, the Gsbrr, who literally inhabit swiss cheese.  Anyone who ate contaminated cheese eventually woke up with a Gsbrr inside his skull.  The Gsbrr used the Babus to try to enslave Earth.  But with the help of President Clodomir, and of some parmesan cheese, Furax and his friends eventually defeated the space parasites.

There was a fourth radio series entitled Le Fils de Furax [The Son of Furax] (1959-60), about which little is known.

All of the Signé Furax stories (except Son of Furax) are now available in CD audio collections. Order on amazon.fr. (Search for FURAX.)

Furax' success also led to a comic-strip adaptation serialized as 1174 daily strips in the newspaper "France-Soir" in 1957-60.  Two collections of the strip were reprinted by Pressibus in 1991 and 1992. 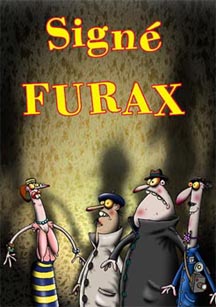 A SIGNÉ FURAX puppet show series of 104 5-minute episodes is currently being developed
by LES ARMATEURS, CARRERE and CANAL +.