The aptly-named Superdingue (the names means Superlooney) is in reality a meek, short-sighted bank clerk named Max Costo (the homonymous "Costaud" means strong man) who believes himself to be a super-hero, Superdingue, even though he appears to lack any super-powers. (When Superman was first published in Spirou in 1939, his alias of Clark Kent was francized to that of Marc Costa - Modern Hercules, which may have been an influence on the name "Max Costo".) 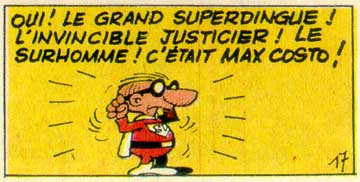 Superdingue tries to do good, but the rest of the world is completely oblivious to his misguided efforts which, in a Mister Magoo-like fashion, always result in catastrophes.

In his tenth adventure, Superdingue is given an assistant, a tall, dim-witted, otherwise unidentified man who had been wanting to become a hero since the third episode, but had been kept waiting behind the scenes. The assistant is too tall to be completely framed inside the panels of the Mini-Récits, and is just as clueless as Superdingue. Another recurring character is the easily-frightened bear Bobar which Superdingue repeatedly tries to free from the zoo (Nos. 6, 7 & 8).